​The presidential election of 1968 forever changed American politics. In this character-driven narrative history, Aram Goudsouzian portrays the key transformations that played out over that dramatic year. It was the last "Old Politics" campaign, where political machines and party bosses determined the major nominees, even as the "New Politics" of grassroots participation powered primary elections. It was an election that showed how candidates from both the Left and Right could seize on "hot-button" issues to alter the larger political dynamic. It showcased the power of television to "package" politicians and political ideas, and it played out against an extraordinary dramatic global tableau of chaos and conflict. More than anything else, it was a moment decided by a contest of political personalities, as a group of men battled for the presidency, with momentous implications for the nation’s future.

​Well-paced, accessible, and engagingly written, ​The Men and the Moment chronicles anew the characters and events of the 1968 campaign as an essential moment in American history, one with clear resonance in our contemporary political moment.

Down to the Crossroads: Civil Rights, Black Power, and the Meredith March Against Fear is the engrossing story of a march that became the key turning point in the history of the civil rights movement.

On June 5, 1966, the civil rights hero James Meredith left Memphis, Tennessee, on foot. Setting off toward Jackson, Mississippi, he hoped his march would promote black voter registration and defy racism. The next day, he was shot by a mysterious white man and transferred to a hospital.

What followed was one of the key dramas of the civil rights era. When the leading figures of the civil rights movement flew to Mississippi to carry on Meredith’s effort, they found themselves confronting southern law enforcement officials, local activists, and one another. In the subsequent three weeks, Martin Luther King Jr. narrowly escaped a mob attack, protesters were teargassed by state police, Lyndon Johnson refused federal intervention, and the young charismatic activist Stokely Carmichael first led the chant that would define the next phase of the civil rights era: Black Power.

Down to the Crossroads is the story of the last great march of the civil rights era and the first great showdown of the turbulent years that followed. Tracking rural demonstrators’ courage and impassioned debates among movement leaders, it reveals the complex legacy of an event that would both integrate African Americans into the political system and inspire an era of bolder protests against it. Full of drama and historical resonance, this book is civil rights history at its best. 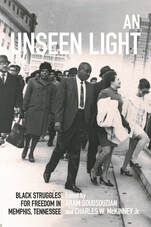 An Unseen Light: Black Struggles for Freedom in Memphis, Tennessee is a collection of essays published in 2018 and co-edited with Charles McKinney. In it, eminent and rising scholars present a multidisciplinary examination of African American activism in Memphis from the dawn of emancipation to the twenty-first century.

Together, they investigate episodes such as the 1940 "Reign of Terror" when black Memphians experienced a prolonged campaign of harassment, mass arrests, and violence at the hands of police. They also examine topics including the relationship between the labor and civil rights movements, the fight for economic advancement in black communities, and the impact of music on the city's culture. Covering subjects as diverse as politics, sports, music, activism, and religion, An Unseen Light illuminates Memphis's place in the long history of the struggle for African American freedom and human dignity. 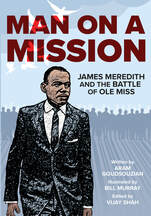 In 1962, James Meredith famously desegregated the University of Mississippi (a.k.a. Ole Miss). As the first Black American admitted to the school, he demonstrated great courage amidst the subsequent political clashes and tragic violence. After President Kennedy summoned federal troops to help maintain order, the South—and America at large—would never be the same.

Man on a Mission depicts Meredith’s relentless pursuit of justice, beginning with his childhood in rural Mississippi and culminating with the confrontation at Ole Miss. A blend of historical research and creative inspiration, this graphic history tells Meredith’s dramatic story in his own singular voice.

From the dawn of the modern civil rights movement, Meredith has offered a unique perspective on democracy, racial equality, and the meaning of America. Man on a Mission presents his captivating saga for a new generation in the era of Black Lives Matter.