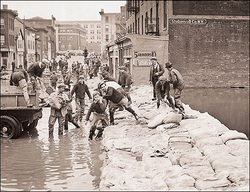 The Hurricane of 1938 is not like my other books.  The others cover some aspect of the civil rights movement’s impact on American culture – they took me years to finish, and with each I tried to write the comprehensive, authoritative account of the subject.  This book, by contrast, is a short introduction to a somewhat forgotten natural disaster during the Great Depression.  So why did I write it?

That story begins with one of my favorite books, William Manchester’s The Glory and the Dream.  In one section of this sweeping, lively narrative history of the United States from 1932 to 1972, Manchester writes about the American response to Nazi aggression in Czechoslovakia, and he pauses to spend five great pages on the hurricane, which he uses as a window into the limits of the U.S. Weather Bureau and the state of American journalism.  Those five pages constituted all I knew about the hurricane, though I remember thinking that the storm might make a great book. 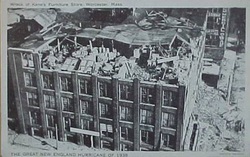 The story continues with my uncertain job prospects after finishing my Ph.D.  I was living in a drafty South Boston apartment and picking up courses at Suffolk University and UMass-Boston, while sending out applications around the country for full-time university jobs.  My dissertation on Sidney Poitier was becoming a book, but I was still waiting for it to appear in print.  My next project was an essay for a book called The Rock, The Curse, and the Hub: A Random History of Boston Sports, which was published by Harvard University Press.  My piece was about Babe Ruth and the Boston Red Sox in the aftermath of the Great War.  I asked Bob Allison, a Suffolk professor and expert on Boston history, for his impressions on my first draft.  He liked it, and he soon mentioned that he was editing a new series for Commonwealth Editions called “New England Remembers.”  He asked if I wanted to write the inaugural book for the series about the Hurricane of 1938. 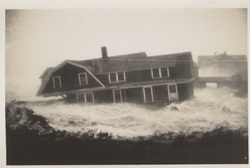 Yes, I said.  I liked the idea of writing a short book after finishing the long one about Poitier.  I had no idea at the time that I would later be writing more big works on African American culture – I just liked good stories, and without any university jobs waiting for me, perhaps I would stay in Boston, so a local history seemed appealing.

And of course, I remembered Manchester’s five wonderful pages.  At the time, the only book on the storm was Everett Allen’s A Wind to Shake the World, though R.A. Scotti’s book Sudden Sea came out while I was writing, and Cherie Burns’s The Great Hurricane appeared soon after.  I soon found a wealth of material such as magazine articles, newspaper clippings, towns’ annual reports, state government hearings, and Red Cross publications. Much of it is collected fifty-six bound volumes at the Massachusetts Historical Society.  These sources allowed me to write a short book that gives an overview of the hurricane’s impact, narrates incredible stories of tragedy and survival, and puts a human face on a natural disaster.