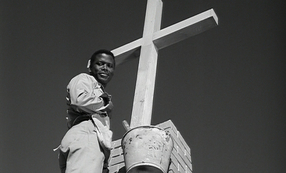 During my early years of graduate school at Purdue University, I had no idea what to write for my dissertation.  I had gone to Purdue to work with Randy Roberts, a great historian of American popular culture.  We were both interested in sports and race, and with his guidance, I published some essays on the history of black athletes, including a piece about the Crispus Attucks High School basketball team in Indianapolis, and another on the Pittsburgh Pirates in the 1970s.  But I could not envision a bigger project.

Maybe, I thought, I could write about black athletes in conjunction with other popular culture figures from the 1950s and 1960s.  So I started fishing around the library, and I picked up Sidney Poitier’s autobiography This Life, as well as a few reference works on him.  What a story, I thought.  Here was a literal rags-to-riches tale.  He was a complex but admirable man.  Even more gripping, he was not only a star, but also a lightning rod for America’s ideas about race.  In about a decade, he went from presenting a groundbreaking image of the black man on screen, to standing as Hollywood’s embodiment of goodwill toward the civil rights movement, to enduring attacks for satisfying white people’s fantasies of mannered, sacrificial blacks.  His image did not change – the politics around him did.

But I still did not recognize Poitier as my dissertation topic, as I was no film buff.  I was eating lunch with Randy and telling him about Poitier.  “Somebody should write a book about him,” I mentioned.  He responded: “Why don’t you write it?”  At that moment, literally, I decided that Poitier was my topic.  My research in archives around the country, the constant searching in microfilm reels for newspapers geared to Hollywood or African Americans, the writing of a full-scale biography that became my first book – it all started with my adviser’s offhand comment.